a) When I have a sticky navigation menu and I want the anchor to include an icon, the stick menu overlaps the icon of the anchor. I still want to have the anchor in line with a header, so I can not place it just above the header.

What would be a solution here? Can we define an offset here?

b) Can we change the scrolling speed? Right now it is more or less instant, but I would love a slower speed so the reader has a better experience. 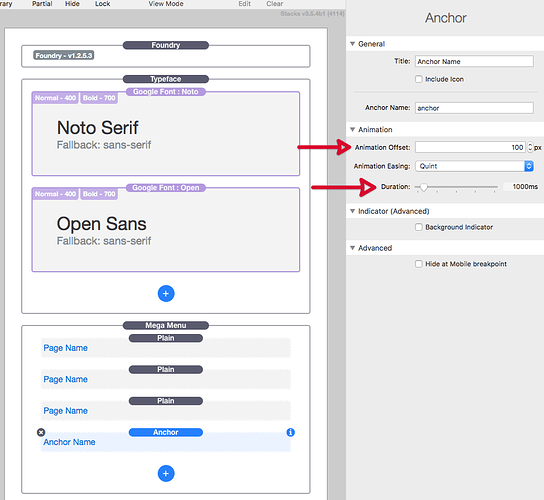 Thanks, I have seen that

But I am referring to the use without the mega menu. So I would love to see these megs menu options in the anchor stack itself. The anchor stack is really great to use buttons to jump to a specific part of a website !

Not sure if anyone recalls several months ago when there was trouble with the Glide stack. That was due to the fact that I had preemptively inserted this exact feature you’re asking about into the base code for Foundry. I had worked up the code for the Anchor stacks to do this and incorporated it into the base Foundry code way ahead of the launch of Potion Pack to get a jump on things. It caused obvious problems and was thus retracted in a subsequent update. So, with that said, it isn’t likely that the feature will come back any time soon, if at all. What you’re seeing with the instantaneous jump to the anchor point is how standard anchor links work.

Thanks, I see. I will be happy if it can be resolved, but it definitely is not critical. Just nice to have.

Yes, indeed Jan would be a nice and very useful feature to have.