Hi Adam, I am using Image Hover. But when a customer looks at the image, he does not necessarily know that he can use the mouse to hover over the image to see a description.

So I would love to have the option to add a small i or any other icon on top of the image (perhaps fontawsome as in the rest of your stacks/provided by Stacks) to indicate that there is more to the image.

I totally agree. Web users must have an indication that an image needs to be clicked or hovered over or touch device users have an alternative indicator for them to be 100% successful. We also shouldn’t forget that many younger users have never used a mouse and are not familiar with a mouseover.

Could this workaround be used for Hover functionality in the meantime:

Agreed! Heard back from the client and she likes it as well. That was a great suggestion and most helpful!

Thank you, but not really. The position is either at the middle of the picture or outside. The middle is too disturbing, and sometimes the hover effect is not triggered when the icon is outside the image.

That is not a feature that is currently on the road map for the Hover Image stack. I’ll take note of the suggestion though, but at this time I am focused on creating some new stacks, so I can’t promise that I’ll get a chance to look at whether the feature would work with the way the stack is coded right now.

@Fuellemann Where on the image were you hoping for the indicator to be? Are you just thinking about something like a magnifying glass icon sort of indicator?

Hi, like the Image card from Weavium - lower right and a setting to adjust the padding. An i as for info or three dots would be fine… the magnifying glass also.

The placement would be adjustable, sort of like in the Badge Box stack.

One down side that I might foresee is that in placing an indicator over the image the hover trigger, which is CSS-based, will not trigger if the visitor is hovering over the indicator icon, only if they’re hovering the image itself. This could lead to confusion. When I look at it I’ll see if there’s a way around that, but it very well might be a limitation.

While I’m fine working on adding it as an option, doing what you mention, adding it to the photo directly doesn’t impede the effect from triggering though. Sometimes the easiest answers are the best. That said, I took a break from what I was working on and started on this earlier today. It is all hard coded right now with no features, options, etc as well as no testing, so it is a ways off still. I’d include a nice animation for the indicator, but then it runs into the problem I outlined here.

No animation for the indicator needed, this is just great. I’d love to see the icon at the lower right

I’d love to see the icon at the lower right…

Looks a lot like the one in the upper right, but a little further down.

In all seriousness though, you’ll be able to choose from all four corners, all four edges and the very center on the image.

In between a large influx of emails lately I’ve had a chance to wrap up the settings on this, in between some other stuff I’m working on too. 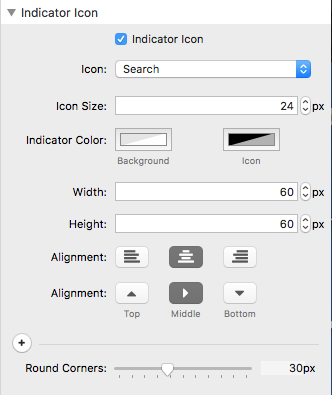 I’m going to get this to beta testers this afternoon. If all goes well I’ll add this into the next Potion Pack update.

Wonderful - as usual, thank you very much!