I would like to host Google fonts (specifically Montseratt light and medium) on my server so this is GDPR compliant.

I have read in terms of the license that if converting these to another font type from what I’ve downloaded these as (OFT > WOFF) that this would be classed as a derivative versions of the font and would need wholesale name changes inside and out of the font.

Does anyone know how to go about this process of changing the wholesale names and what I need to do?

I know how to convert the fonts just not how to go about this part.

Update - I’ve found on another forum that someone has said you are allowed to convert into WOFF format while keeping the reserved font name, as long as you dont subset. Other formats or subsetting are not allowed without changing the name. Does anyone know if this is correct?

I simply set Google fonts in the Foundry Control Center stack and/or in the Typeface stack. 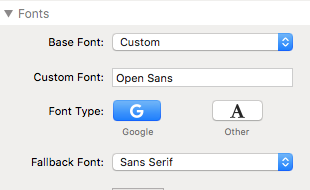 All of the Google Fonts can be found here: https://fonts.google.com

No need to convert the fonts or install them in tour OSX.

As a note – You should only be using the Typeface stack. The custom option is deprecated and will eventually go away. Typeface does a better job in handling the font loading.

Thanks for your response. The issue with this is this is not GDPR compliant (I’m based in UK) as using a font hosted by Google means that it calls on their CDN and an IP address is recorded.

My understanding is that this requires consent to be sought and then these fonts should only be loaded if consent is given by the website visitor.

The recommendation in every article I’ve read is to host these locally on your own server.

I have now managed to find One Little Designer’s free webfont helper stack - Webfont Helper - Google Fonts for RapidWeaver which has a lot of google fonts already converted and have extracted the fonts I needed from the Stack and used the WOFF versions with the Typeface stack which works well. Slightly slower loading times but nothing drastic.

You can download Google Fonts from their individual pages, as seen here: 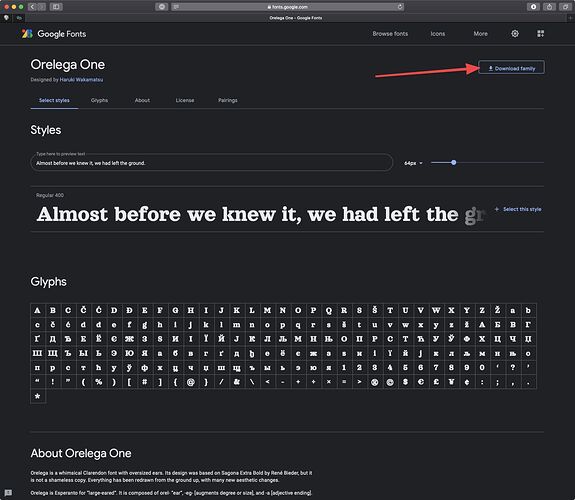 No need to pull them from other stacks, and this way you can download the ones you want specifically. Then use the self hosted feature as you are now.

Hi, I always use this site to check the fonts and download them. Then I use them self-hosted in the project: google webfonts helper

Just to be clear @elixirgraphics , once we’ve downloaded our chosen font from Google in an effort to avoid the GDPR compliance issue as mentioned by @Creator84 , do we then have to install them into our System Font Book app for us to then use them as part of The Foundry Typeface stack ?

No, just put the WOFF files into the ressources and link to them: 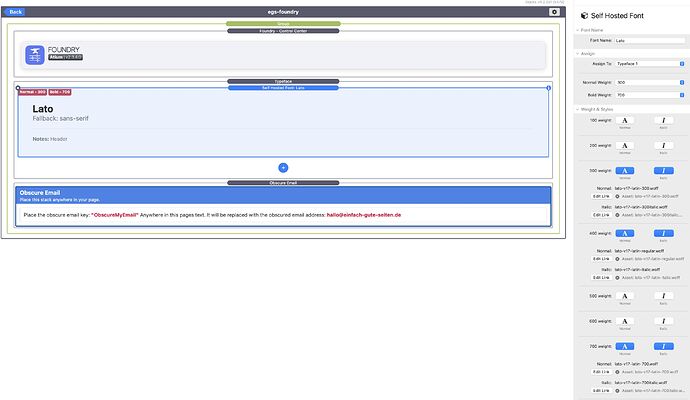 Hi @DinkyPixel – There’s a whole video on the steps for self hosting over on the Foundry site in the documentation: Typeface Documentation

Give that a watch and I think you’re covered.

Thanks for that ‘heads up’ @Fuellemann. I need to also watch the video that @elixirgraphics mentioned

The video walked me from not having a clue to having the fonts downloaded, converted, self-hosted and fully working on my sites. It’s the only resource you’ll need.

It can. I don’t know how much you’ll notice it though. Using Google Fonts has the advantage that if your visitor has gone to a site using the same font(s) you’re using then the font will already be cached on their computer. Since there are a lot of sites using Google Fonts you have a better chance of this occurring.Your self hosted font won’t have that same benefit.

Your self-hosted font will load from your server, so your server’s speed will influence the load time as well.

That said, just like with Google Fonts, the more fonts and font weights you load, the slower your page will load. The trick it to load just what you need and no more.

Actually, I am asking this for Self Hosted Google fonts. My website first shows the default font and then loads the font I chose when switching between pages, which is very annoying. I was wondering if it would be a better solution to upload the google fonts I chose to the server to get rid of this problem?

I understood your question. When I refer to “Google Fonts” I’m talking about the service not the fonts themselves.

As for the font loading and switching — that is simply how non-standard fonts, aka non web-safe fonts, load. If fact this methodology allows you page to load faster. If the rest of your page’s content has to wait for all of your fonts to full load first then your page would take much longer to load.