I just uploaded my second Foundry website this month I am glad to say! I started posting about it half a year ago. One of my objectives with this new site was to push the animation features further. Most animations seem to be working but I have an issue with it on mobile.

Thanks for all the help in 2022 to get this site online, everyone who helped! 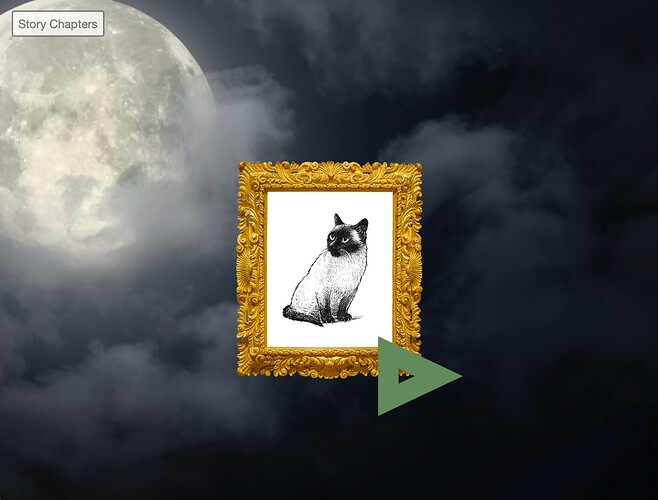 Re: text being cut off, looks fine on my ipad mini in portrait / landscape position

Thanks for looking into that. It must have been that perhaps the type was set to a larger size on that specific iPad or from within the browser? The reason I set the type in those smaller blocks was so I could set it aside the square Bloom picture stacks but it also means I have to be aware of the content potentially getting cut off too.

Are you using 3 columns for the framed picture and the arrow graphic?

Yes, I was trying to think of some way that I could add blank space to the left of the image. So the first column is blank, picture in column 2 and then next arrow in column 3.

Maybe try setting the columns up this way, i did a quick try, have to play with settings when I get back. 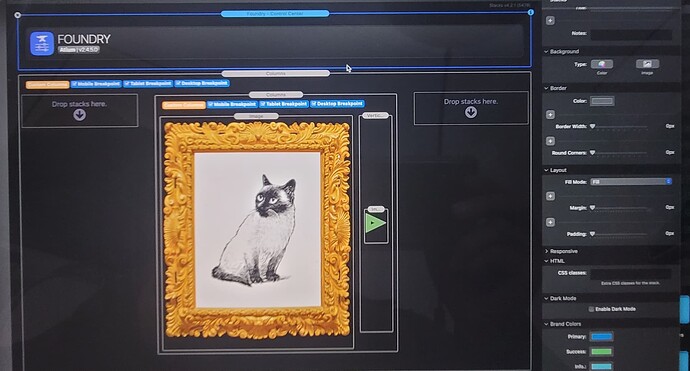 Sorry I fell back to sleep since it was 5 am. I tried nesting a column inside a column. I was wondering did you change the column widths for the different devices or just keep the default numbers? Also the next arrow is inside of a overlap stack. I just realized I should have provided the numbers for that.

I am trying to remember why I picked those numbers. The phone was set at zero since the arrow doesn’t animate there. But why did I set the horizontal at zero? That might be the problem but it seems too basic. Maybe I wasn’t sure if the iPad could animate since it is similar to an iPhone. I think the iPad can animate so maybe this is as simple as putting in a number as close to the desktop? I guess I will have to test those things out again.

Hi
Yes i did change the values for the 3 columns. I tried to give the most space for the second column where the image and arrow is nested. Not sure about the overlap stack though, didn’t you not want the arrow to overlap the frame?

It is really strange, the stack is called overlap so you would expect the item inside to overlap the picture frame, naturally, but somehow I used it to go below the image lol! You will noticed when it starts out the arrow is completely hidden behind the picture frame. You can’t see it at all on a normal big screen desktop, it is not until the reveal stack reveals it.

That seem to make sense to make the middle column stack the biggest. I’ll try that when I get back from my errands.

I think there is a z-setting in the overlap stack. Try to adjust that number and make it really high:

Ok, I’ll look into that, thanks.

I tried increasing the Z index number to larger one like 50, 100, 500 but I don’t see a lot happening. I am not sure if it is so much that I am trying to change the placement of how images are stacked but just to move the arrow a bit further to the right.

The one thing that got it to move a little (and this is on tablet landscape mode I am specifically referring to) was to put the objects into a column stack set at four columns. I put the cat in frame 2 and the arrow in frame 4. As you can see it almost moved off the frame but not quite! It is so close. All other orientations are fine I think. 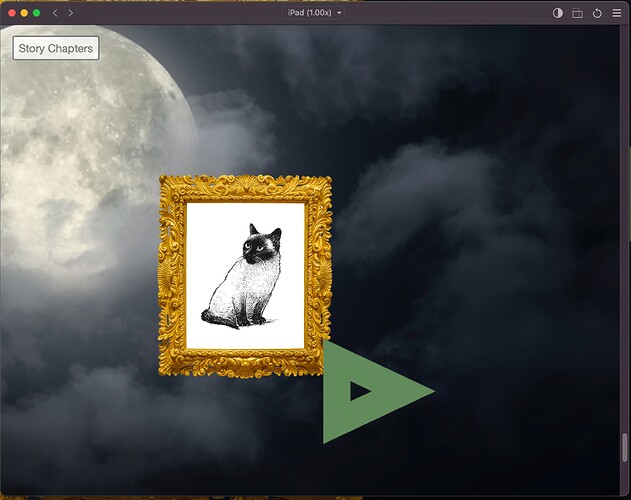 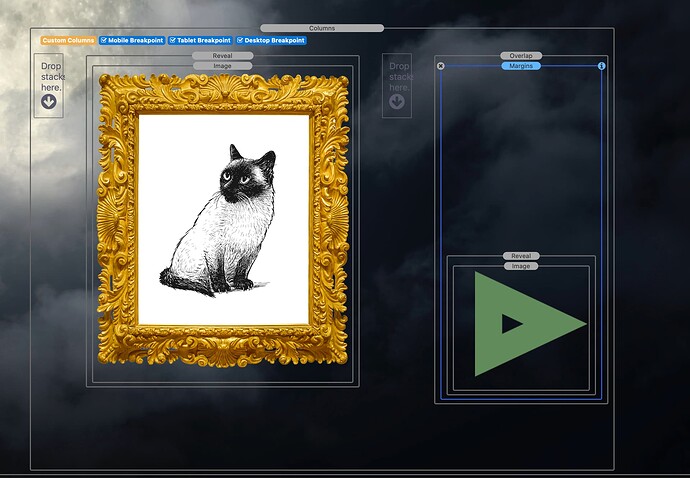 If you want them to overlap, place the arrow graphic under the framed cat image and use the horizontal + vertical inputs to adjust the position. 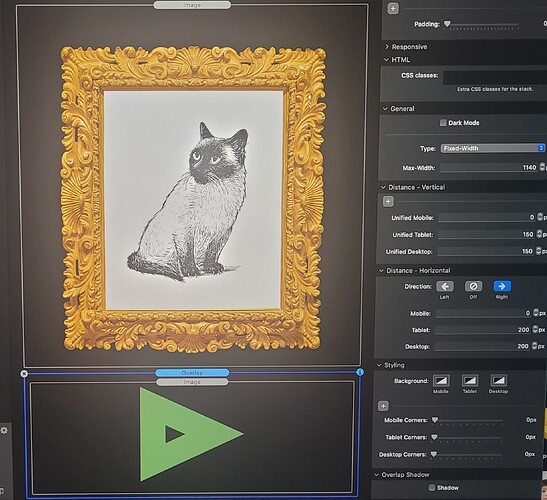 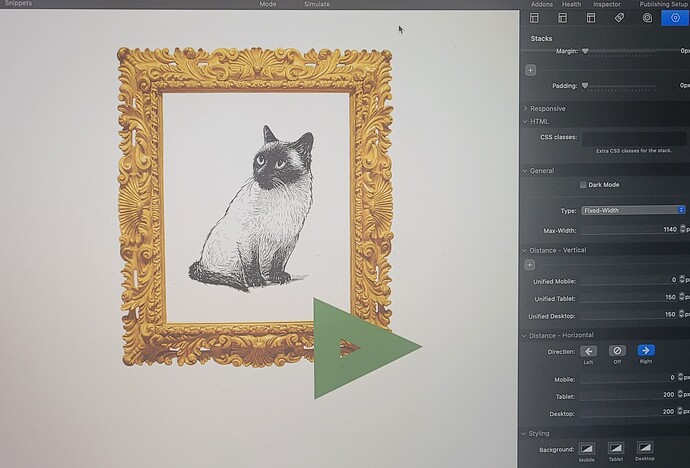 Okay that makes sense. I think I found a solution that works well enough.

This is my first site using overlap and I’ve found some pretty different uses for it. One next button stays still over the image (bottom of page) but I thought the bright color on the darker photo helped it stand out. One the heading slides over the image and another an image over the image. With this much variety I am starting to get a pretty good idea what it does.