Is it possible to embed a Youtube Playlist with this stack?

Or if not this one can i with another?

The Video Embed tool in Foundry allows single videos, not Playlists. There is not a Foundry tool for Playlist embedding.

Can you make one

ill buy it I swear

Not at this time. I’m in the middle of a very large project. I’m sure there’s something out there already that will do this. I’m just not aware of who makes it.

A simple Stack for embedding YouTube video. uTube is reponsive and supports both Flash and HTML5 players (free)

Some of his other video stacks may work as well with playlists.

I have a playlist that I update daily that I want to update on the page without interaction from me. 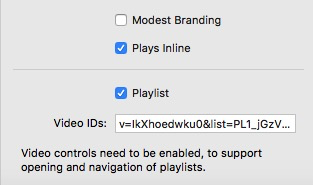 actually its funny because you pointed me in the right direction. the same site had anotther stack called uTubeChannel. And it is doing more then I thought I would get out of it.

A free stack for RapidWeaver that generates a responsive channel playlist and video player, sourcing video content from YouTube

let me know what you think Amy Brookes and Erin Marie are two of the most down to earth, everyday gals around and they happen to spend their days talking to the dead! Pull up a chair and join these laid back ladies as they break down misconceptions, spread a little sunshine...