When I tried running the page on two different Windows machines this page didn’t load on either Chrome or Edge. Actually the menu bar loaded at top loaded but nothing else on the page loaded. It doesn’t seem like that one page is all that different from the others to me so I’m having a hard time figuring that out. I’ve tried it on several Macs, iPads, iPhones and everything will at least load. Anyone know what the problem might be?

You’d placed your entire main content area in an Eclipse stack that is set to Dark Mode, so it only shows in Dark Mode. Windows doesn’t have Dark / Light mode.

I believe you had this problem once before, right?

Oh okay, I don’t use Windows enough to know whether it had dark / light mode. I’ll get that changed once I get back to my machine today. Yes, I had the problem with iPad on a different page I think. I should really stay up on the differences and changes with Windows and Android more. One of the problems with doing all the same pages at once I also make the same mistakes more then once. Thanks for the help.

You’d have the same problem with Mac though. Currently your page will not show any content if the Mac user is using Light Mode, as you’ve not included any Light Mode content.

Honestly I think Light / Dark Mode stacks can be a problem for many users. They should be used sparingly, IMHO.

I think Windows 11 does have dark mode now? At least that is what it shows in this video of a beta which came out this year. Seems like the Windows 11 machine I was on was dark but I can’t totally remember.

I really hope Rapidweaver 9 adds a light mode / dark mode toggle under “Simulate.” If the brightness mode was as easy to test as it is testing phone or tablet view I would check that more often and it would be obvious what is going on. I added that feature suggestion to the next version if others feel that is something worth adding. Dark Mode / Light Mode toggle in "Simulte" viewer · RapidWeaver Feedback

Like I said, either way you didn’t have any content for light mode. When I visited your page on my Mac in light mode the page was blank.

Right I understand. I striped out the Eclipse stack yesterday and will get that fix uploaded soon.

Windows 10 has light/dark mode. You can set it for Windows itself and separately for all apps. 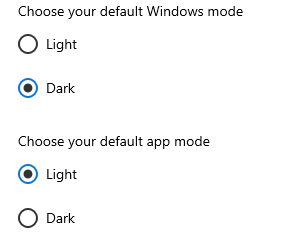 Yeah it seems like it would have come out roughly when Android and Apple released it and Mac had it maybe 5 years ago. It basically worked as a counter-balance to the really bright screens that were come out at that time.