Partial with Foundry CC and Navbar outside Partitions stack?

I’m using Partitions to contain my Alloy blog, and that part seems to work fine. But I also have a partial (appearing on every site page) that contains the Foundry Control Center stack and a Navbar stack.

Adam said that nothing on a Partitions page could be outside of the Partition stack, so I just tried putting the Foundry stack by itself on that page and then put the Navbar inside the Partitions topper. But that looked weird for some reason idk. 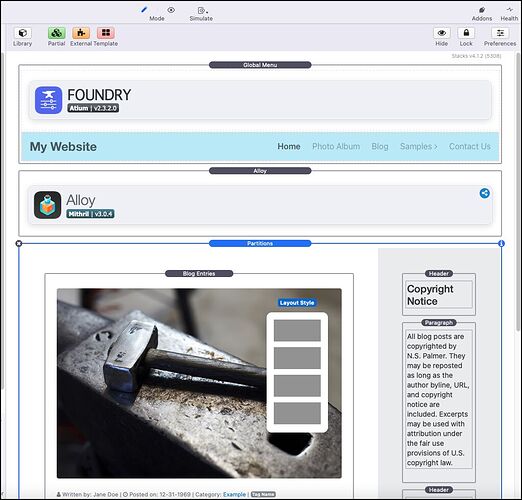 Navbar-inside-partial-with-Foundry1022×978 112 KB
, which means the Navbar is outside the Partitions stack. But it seems to work okay when I publish it and display it in the browser. Is that a stable situation, or is it likely to blow up because the Navbar is outside of the Partitions stack? Thanks in advance for any info. Screencap attached.
elixirgraphics December 1, 2020, 9:44pm #2

I see people do this a lot – putting the Control Center and their Navigation together. I personally would never do it that way. I always give the Control Center its own partial. You’re not limited in the number of partials you can use, so there’s no reason to pair them together for something like that.

There’s an example project file that shows how the Foundry Documentation pages were built. This might give you a good starting location.

Thanks, Adam. I didn’t know any of that. I appreciate it!

No problem. That’s how we learn things, right?

Let me know if you have further questions after looking at the example project file.

I got it to work. Thanks for the advice. The reason that the Navbar previously looked funny when I put it in the topper area was that I used the Navbar stack right out of the stacks list. The Navbar in the Partial was customized, but I had done it so long ago that I’d forgotten I did it.

I might have found a minor bug in the Editor stack’s image upload. I’ve done this two or three times, which isn’t conclusive but it seems worth checking. If you (1) upload an image to a blog post, (2) save it and publish the blog post, (3) use an offline image editor to make some change in the image, and then (4) upload the revised version of the image, it looks like the Editor just uses the original version of the image because the file names are the same. When I changed the file name slightly, then followed the same procedure, the blog post displayed the new image. Now, there is a little uncertainty because my website host sometimes has a lag before new or revised files are visible on my site. That is a possible alternative explanation for what I saw. But if you think it’s worth checking out, you might try it.

…and then (4) upload the revised version of the image…

If you upload an image via the Editor it will not overwrite an existing version with the same name. It instead appends a number to the end of the filename. This keeps you from accidentally overwriting an existing image and screwing something up if you use the same file name from another post or something else.

If you can provide me some more information, and maybe some step-by-step screenshots I can better troubleshoot your problem. In addition a copy of your Image Uploads folder wouldn’t hurt either.

Hi Adam, I don’t really have a problem now that I know how it works. It sounds like it’s a safety feature that becomes a “bug” only if a user has that specific situation and doesn’t know about the feature. But thanks.