I work now for some weeks with foundry and like it a lot, so I decided some days ago also to change the blog system to alloy. There is now one problem: In the Full entry mode I see on my page not only the full content from the single post on which I press the more button, but the full content from ALL posts:

There is also strange behavior in the editor: also there I see after I made a second post in the edit mode the first and the second post, it doesent no matter which post I choose to edit (I eclosed two pictures for that).

Thank you in advance for your help. 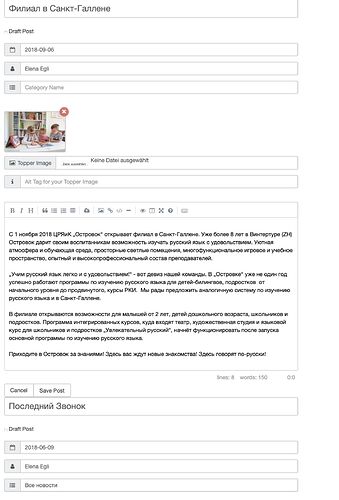 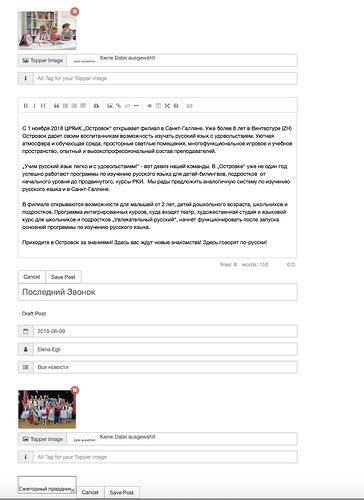 Hmmm, that is a new one. @Fish_77 if you can send me the following items I can take a look at it. I’ll need the following things:

These should allow me to troubleshoot your situation I hope.

OK of course I can do that - on which E-Mail Adress?

You can send it to adam at elixirgraphics dot com

Send it all inside of a ZIP file. When you do you will likely want to send it via a service like Dropbox or the like as it will probably be a large file.

I send you Mail with files and download-link (Project-File is too big to send) - thank you in advance for your support!

So, you guessed it, Alloy is stripping out every single Cyrillic character from the title when making the filename, and in doing so creating a filename that consists of just the date. This means Alloy loads all of these no-filename-files together since they all have the same filename.

I need to strip out those bad characters though to make sure there’s no problem with filenames… but I am looking at transliteration for the filenames as an advanced option. I’ve emailed @Fish_77 a test version of Alloy to try this and see if it will work for him. If it does work for him, and others don’t see a problem with this as an added feature, then I’ll implement this as a feature in a future release.

thanks a lot for your real premium-support - with the beta-stack it works now absolutely perfect!

Have a nice day/evening and

… little addition. all blog file-names are now correct, I added a picture that you can see the result from the beta-stack

Awesome! And I got to learn about transliteration today.

Let me know if you run into any other problems with this feature. It will be a little while before I release this widely. If anyone else who is using Alloy is working with Cyrillic or another non-latin-based language drop me an email and I’ll get you a test version to try.

Hi~I am wondering if the latest release fix the non-latin-based language issue or not? Thanks for replying

I did not add the transliteration feature to the latest update. It was rolled into the larger update that I hope to start working on soon. As I didn’t hear back from anyone when I posted in this thread last in Sept 2019 I assumed this was not a priority feature for anyone and thought getting it some more testing would be good before a wide release.

Are you experiencing a problem?

@iethanchen – if you are having a the same problem as was discussed in this thread I can send you a beta that you can try out.

I bought Foundry v1 upgrading to v2 and the thunder pack. They work perfectly well and I am really interesting in Alloy.However I encountered the character issue before coz of another blog stack called Poster. They fix it after a while and now working great. Unfortunately Poster is not online blogging so I would like to replace it with Alloy. I would like to ask pre-purchase questions then add Alloy to cart coz I like your work very well and believe you will do it right soon. Look forwarding to major update coming and thank you~

Major update is a long ways off unfortunately.

That’s fine.At least I glad to know you’ve developed a beta version. I bought Alloy and could you send the beta to me? Thank you~

Let me take a look at back porting this to the current version of Alloy on Tuesday when I’m back in the office.

I’ve back ported this and just pushed it out as an update in Alloy v2.2.3.

I’ve updated the latest version and activated the transliteration feature. Unfortunately it didn’t work. The slug became blank when the title is written totally with Chinese words so that I can’t load into the individual page.
It works only when there are English letters mixed.
Could you plz help to check it out? Thank you.

Your file system might normally handle the Chinese characters OK, but I have to run a filter on the ID to strip out characters like single and double quotes, percentage symbols, etc. In the process it strips out everything that is not a part of the filter.